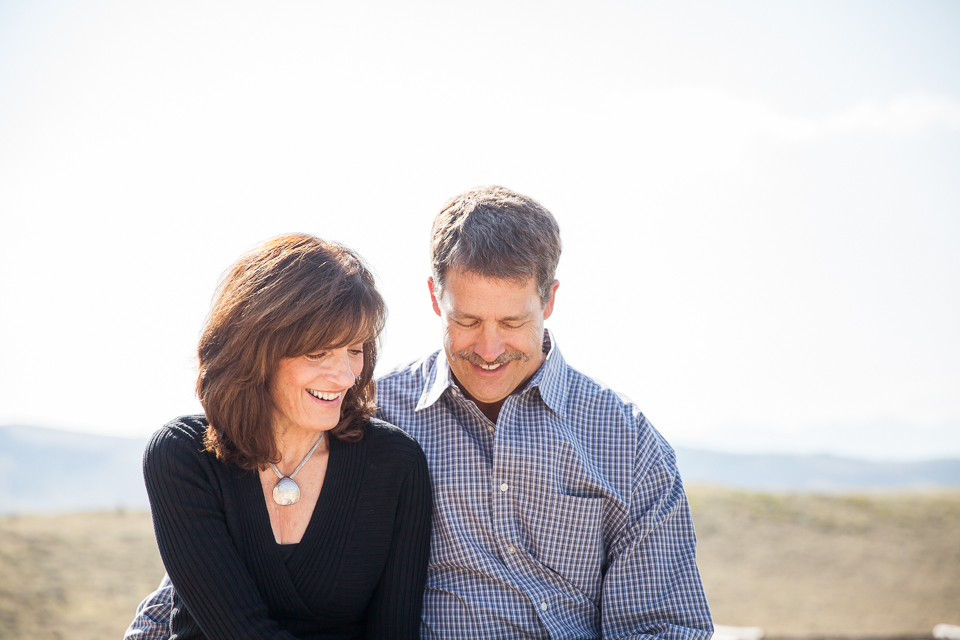 The first night they met, Charley lit Lynn’s shirt on fire after dancing. On one of their first real dates, Lynn was craving a pastrami sandwich, so they drove from Ithaca, NY to New York City and didn’t sleep a wink. After a couple months of long-distance dating, her in Ithaca, him in Syracuse, they both spent semesters abroad. Lynn went to France, Charley went to South America. They met up in Europe and traveled for three weeks over Christmas break.

It’s these kind of adventures that have brought Charley and Lynn to where they are now: celebrating 35 years of marriage! One thing is most apparent when talking to them: fun. They laugh at each other and tease one another as if it’s still a brand-new relationship.

They invited me, my husband and my in-laws up to their house in Granby for a weekend so I could take photos to celebrate this life event in August. After the shoot, we sat down and I grilled them about what that kind of relationship takes. Their early years were full of big moves, new jobs and adjustments. If I could sum it up in a word: risk. They took chances. They followed opportunities and didn’t seem to second guess themselves. At one point, Lynn said: “We just didn’t take so long to make decisions. We didn’t overthink life. We let it happen because it’s usually good. You can’t engineer it all; it’s a mystery, but it works.”

Sidenote: She’s right! I think of how me and all my friends make choices. Everything has to be “just so.” Listening to their story and seeing their amazing life now, it made me realize that no matter how much we all try to plan, life is still going to happen. Worrying and stressing and planning doesn’t change the fact that one day turns into another and ya somehow gotta make it work. (Thanks for that nugget Lynn!)

Even when they experienced a massive life shift, having children, they didn’t change the way they lived their adventurous life. Lynn had a moment of doubt, “I didn’t even know how to change a diaper!” So they moved from Colorado back to New York to be close to family. Lynn continued: “Within six months, we knew this wasn’t for us. We both missed Colorado. We moved back and have loved it here ever since.”

Then life threw them both a curveball. Charley got laid off from his job in mineral explorations, right before Christmas. They had a toddler and a baby. It wasn’t great timing.

But that event became the catalyst for Charley to figure out what he was really good at: building businesses. “I read this book, ‘What color is your parachute?,” designed to help people figure out what they should do for work,” he explained. He had always been a geologist, but the results he got from the test in the book eventually propelled him into self-employment where he built several consulting companies, mostly in environmental science. “I’ve been doing it ever since.”

Lynn’s career path led to consulting too. Using her degree in Communications, she took a job doing technical writing at an engineering firm shortly after they were married. She fell in love with the industry and grew in it for the past three decades, doing consulting, sales and project management for various firms, mostly in the utility industry.

Looking at their careers, it appears as if they took all the right steps and made all the right decisions from day one. But that wasn’t the case. They made logical choices, following what life presented to them and found careers that they love. After graduating from college at 22, they didn’t know exactly what they were going to do with their lives. They didn’t even know where they wanted to live! But it all worked out.

“You need to be realistic to be married this long. There are going to be hard times. But if you don’t overdramatize it, it’s all good,” said Lynn. Charley continued: “You have to make each other a priority. Sometimes, we’ll just sit on the couch, facing one another, and talked for 20 minutes. No phone, no TV and no conversation about the kids…those were the rules. It reminded us of what that fundamental thing was that we fell in love with about the other person.”

Happy 35th Anniversary Charley and Lynn! I hope these images do justice to your fun, exciting love. In your casual conversation, you taught Travis and I so much about marriage and honestly? How to lighten up! You have no idea how important it was for me to see successful business owners be breezy. I am the opposite of breezy and you guys make it look easy!

I felt so lucky to capture these images for you and even luckier to learn from you two what marriage is all about. In our short time together, we learned a ton and I’m so grateful for your willingness to share that wisdom! Thank you!