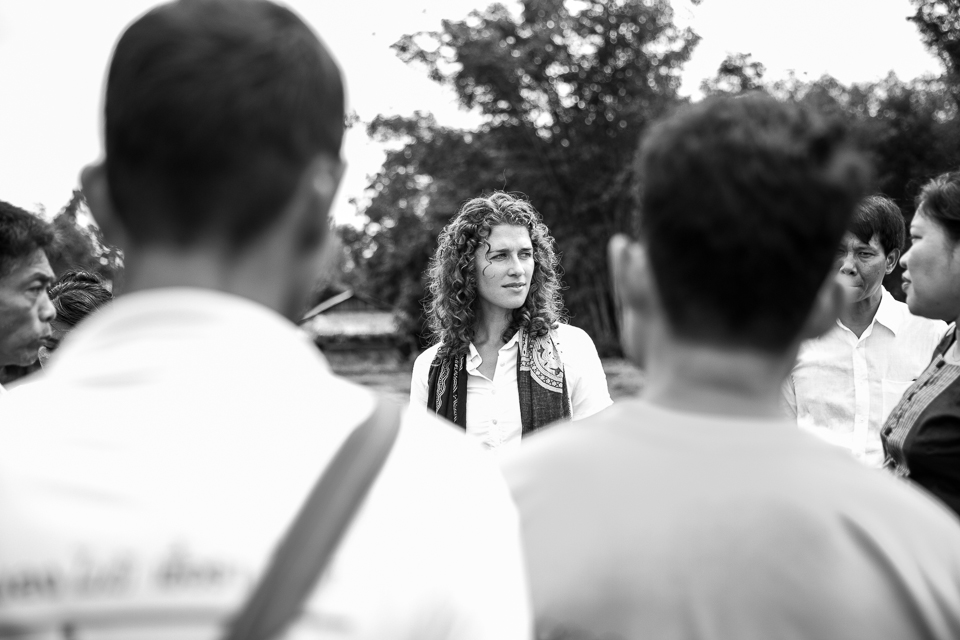 Kendyl and I have been having lengthy conversations about her organization, NomoGaia, since I moved to Colorado in 2011. For a long time, I just understood it as her traveling the world and advocating for human rights. She would tell me about specific, politically charged projects and I would stop her every couple sentences to have her define a word or explain an event. She always spoke so passionately, but I was always overwhelmed by her knowledge.

Over time, I began to realize that it was difficult for her to explain what she does because she has such an intimate understanding of each place and project she studies. She spends months researching tiny towns and villages, to be able to serve its people to the very best of her ability. But sometimes this research keeps her [brilliant] brain focused on the micro, when the rest of us can’t even begin to understand the macro.

As I began to realize this about her, she invited me to go with her on a trip. To Myanmar. To investigate a power plant. Me?! I was absolutely shocked. Let me compare our intellect in simple terms…if I am Hershey’s chocolate, Kendyl is a Swiss brand so expensive none of us have heard of it. If Kendyl is Anthropologie, I am the GAP. And finally, if I am a Honda Civic, Kendyl is easily a Lexus.

She will be horrified at these comparisons, but I do it to make a point: Kendyl’s brain functions on a different level than the rest of us. She is finishing a PhD (I had to google how to abbreviate that, no joke) in Epidemiology this fall and has successfully run NomoGaia for the past six years. If she were giving you her own bio, she would put in a self-depracating remark here. But I’m not doing that because it’s my blog and I’ll do what I want.

Anyway, I came to see that the most valuable thing I could give to Kendyl and to NomoGaia wasn’t simply photographs. It was accessibility. Because Kendyl’s brain fires on all four cylinders and the rest of us only grease up two (last one, I promise), I wanted to come up with a way to describe the organization that made sense. To everyone.

After traveling with her to Myanmar, asking her approximately 17,000 questions each day and listening to her talk to countless individuals, I think I finally get what NomoGaia does. And you absolutely need to know about it. Her work is so, so important and I want every single person I know to understand and appreciate it. Kendyl and I have been emailing since we got back, trying to come up with an accessible description of NomoGaia. It’s longer than I wanted, but ya know what? This is some complicated stuff.

I know this is a lot of info, but press on reader! I believe in you!

In 1948, the 58 member states of the United Nations signed a Universal Declaration of Human Rights, agreeing to uphold human rights in their countries. The document became the foundation for human rights in our world, with enforcement falling to individual governments.

There are now 193 member states in the UN, and each is charged with protecting, promoting and fulfilling human rights within its borders. Not all these states are conflict- or corruption-free, which has made the whole arena of human rights a bit cloudy where governments have been perpetrators of human rights abuses. The fog gets thicker when companies enter the picture. Unlike governments, companies have not, legally, had a duty to uphold human rights or a clear standard to follow. Sometimes when a company operates in a small, cash-strapped country, both the government and the company focus on the business transaction and forget that the mine (or dam or oil field or power plant) that will generate revenues for the power players may also have significant, negative implications for people in the area. Simply put: money trumps human rights.

NomoGaia navigates this corporate space. Since 2008, a consensus has developed that governments have a duty to protect, promote and fulfill human rights for their citizens, while the private sector (companies) agrees to conduct due diligence to demonstrate that they “respect” human rights. This clarity of duties is helpful, but there is no governing force to implement best practices and to prosecute violations of human rights, especially in developing countries where governance is weak – how could there be? Who polices global business? Past efforts to do so have ended poorly.

And that’s where NomoGaia comes in. It’s kind-of like the unicorn of the business and human rights world, as every project it does gets published. A lot of human rights assessors (both “nonprofit” and “consultant”) keep their tools, matrices, and algorithms private – only to be seen by the companies they examine. And all of them charge money for these assessments, making human rights findings the property of companies. But isn’t that privacy counterintuitive to the whole idea of advocating for human rights? If it’s about seeking justice…if it’s about raising awareness…if it’s about changing people’s lives…then shouldn’t we all be involved?

NomoGaia’s work is as much about individual lives as it is about entire nations. The work they do is not just to help poor villages in Myanmar get electricity or workers in Tanzania get higher wages. The work they do is to shift the way companies, financial institutions, and governments perceive global development. The work they do influences conversations about human rights, trying to navigate the murky waters, bringing clarity and solutions to the global table.